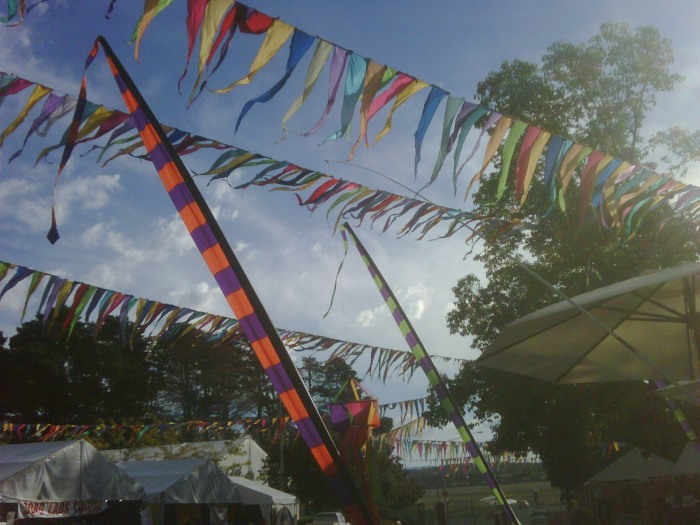 The 2007 National Folk Festival is by now but a handful of dim, fuzzy, yet pleasant memories on the rear horizon. Before the festivals themes of Western Australia, water and the Middle East fade completely away, here are a few observations on some of the talent and goings on in Canberra over April.

Lessons learnt from the Easter weekend at EPIC: the Canberra Contra Club did not receive arms (or any other body parts) from the US Government in the mid-1980s. The Lawnmowers are not available for freelance landscaping jobs. Madviolet did not take their name from an aggressive (and since discontinued) Dulux paint chart. But it is true: the Jinju Wishu Academy were approached for next year’s Tamworth Country Music Festival – until Academy members quietly explained they are in fact ‘lion dancers’.

The Western Australians were in town in greater numbers than usual, and hopefully those present took the time to meet, greet and hear from a bunch of singers, songwriters and musicians that might not ordinarily make it to the east.

Simon Fox (from WA via Vancouver) treated audiences to a stack of his original tunes, including one that nearly got him evicted from his apartment during the creative process. He’d practised the bluegrass licks so many times that his neighbour above was going quite spare.

Simon claimed it was revenge for his having to listen to his country and western neighbour incessantly banging his foot on his floor (Simon’s ceiling) in time to his own brand of music. The audience burst into applause at the end of Simon’s tune: ‘Yeah, you like it, but you didn’t have to listen to it for hours in a row!’

A WA Songwriters’ Showcase in the Troubadour on Sunday was the perfect opportunity to catch a stack of westerners in one hit, and provided one of those little finds that make festivals such a joy. While there were plenty of great songs in the ninety minute or so show, a real highlight was Simon Nield’s ‘We’re Mostly Water’.

A beautiful song by a West Australian featuring water; if only he’d played it on an instrument from the Middle East he could have taken home the NFF 2007 Theme Trifecta.

Canberran guitar legend Johnny Huckle played a number of inspiring sets, including songs from his inspirational ‘Spirit Man’ album. During one song intro, his daughter came up on stage to tell Johnny that her friend had bitten her lip. ‘Isn’t it great that she can get up on stage and tell her Dad her problems?’ admired Johnny. ‘I guess that’s what I’m doing. And I get paid for it, I hope!’

Regular festival-goers will be used to seeing promotional posters taped up everywhere: in the bars, on every spare wall, and especially in the toilets – always a captive and guaranteed audience to be had there.

However, Nancy Kerr (in Australia for a couple of months playing gigs with husband-to-be James Fagan) gave an explanation of why their promos weren’t quite so prevalent in the loos. ‘Apologies for the lack of our posters in the men’s toilets. I didn’t want you to associate our faces with the smell of urine!’

The Poets’ Breakfasts were well-attended as always, though one of Saturday’s MCs (Australian poetry legend, Vic Jeffries) was less than pleased with the sometimes muted level of applause.

’This reminds me of school. Did you do fairy claps at school?’

‘Not in WA, mate!’ came an indignant shout from the crowd.

Blackwood (featuring the talents of Rigby, Rigby, Thompson and Rigby) informed us of a story that’s been doing the rounds on the security risk of travelling on planes with stringed instruments. Apparently at least one airline got a bit antsy about the prospect of all those lethal strings being on hand in the cabin with their potential to be turned into lethal garrottes to strangle the hosties with.

(I’ve since read that one potential terrorist was allowed to keep his violin strung during the flight, but was asked to mail his spare strings to himself at the destination to remove the security risk.)

‘So next time you’re travelling by air, be sure to take out your vocal chords!’

Bernard Carney and co. delivered their annual dose of hypnotism during the Beatles Singalong at the Merry Muse. No matter how much you might not think you’re a Beatles fan, somehow almost all the lyrics are there, strewn around the grey matter; three chords and a packed house is all it takes to bring them to the surface.

This year’s ‘Infinite’ musical competition challenged musicians and singers to present a number from ‘The Sound of Music’, which brought forth more fake nuns from the cloisters than you could point a sceptre at, and John Thompson from Cloudstreet hit a high C that prompted The Canberra Times to compare him favourably with June Bronhill.

I never did find out if competition MC Kate Austin found an answer to her question: ‘How do you solve a problem like Moruya?’

WA’s Peter Bugden wasn’t on the program but he played a very well-received set at the Troubadour late Saturday night, regaling the audience as much with his on-stage patter as with his wonderful songs. His musical success had apparently come about in spite of his mother’s lowly predictions of how far his star would rise: ‘You’ve got a great face for radio, but you’ll never get a job in it; you’re too tall!’

Keith Donnelly was a very welcome returnee after leaving us laughing in 2005. Keith confessed to knowing no Australian songs, so he wrote one to compensate, Men at Work-style:

‘I come from a land up over
I’m a whingeing Pommy Geordie rover.’

On the subject of religion, Keith said he was a ‘Jehovah’s Bystander’. “They asked me to be a witness, but I don’t want to get that involved.”

Christine Wheeler was there with the Wheelers and Dealers, though she forgot the merch and had to send her husband back to the car at the start of one gig to collect the CDs. At the end of one tune, she explained something of her whistle-playing style:

“I did try to squeeze my buttocks to get an extra semitone out of that whistle.’

“Try blowing it through your mouth, Christine!” suggested someone from the crowd.

And finally, I got a worthy riposte to my standard MC’s instruction to acts when they’re tuning/warming up, from Miguel Heatwole, singer extraordinaire from Sydney:

MC: You know the drill; just throw something heavy at me when you’re ready.

Of all the acts at the 2007 National Folk Festival, those were some of them.